The Minnesota Vikings linebacker wasn’t satisfied with a recent statement released by the NFL.

With the recent death of George Floyd taking place in the city they call home, the Minnesota Vikings haven’t been shy about making sure everyone knows their feelings on the tragic incident.

Following the death of Floyd, the Vikings released a statement that expressed their tremendous sadness regarding the incident that happened down the road from their home field at U.S. Bank Stadium. Minnesota also emphasized that every person in their surrounding community, “deserves the right to feel protected and safe.”

A few days after the Vikings released their statement, the NFL put out a statement of their own. A number of players, including members of Minnesota’s current roster, were not satisfied with the generic remarks that made up the majority of the league’s reaction.

Minnesota Vikings linebacker asks the NFL what their plan is to fight for justice.

Following the release of the NFL’s statement, Vikings linebacker Eric Kendricks took to his social media accounts to question what exactly the league is doing to, “support the fight for justice and system reform.”

Kendricks added that the league’s statement was, “vague” and it “said nothing.” Below is the full reaction to the NFL’s statement from the Minnesota linebacker. 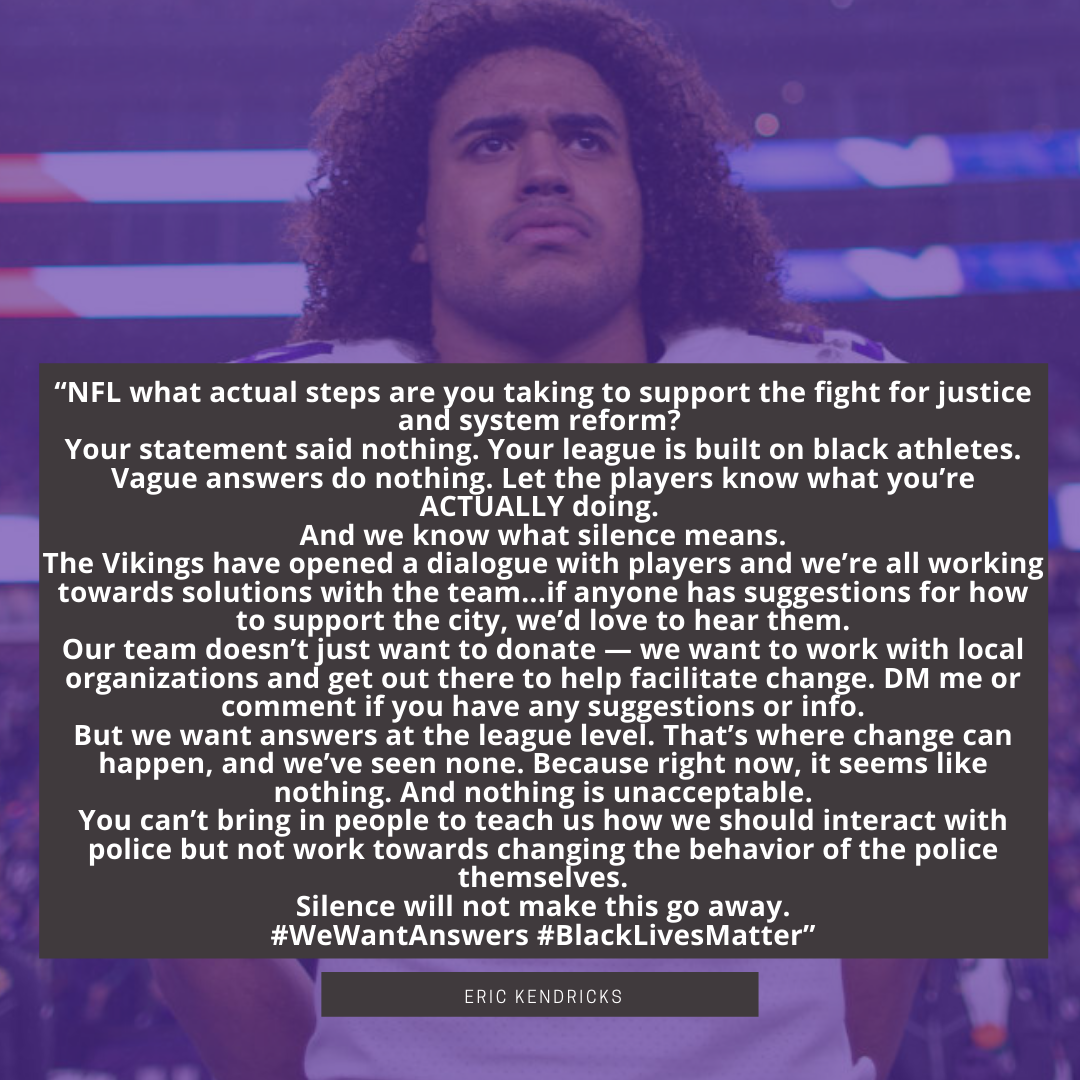 During the last week, a number of current and former Vikings players have released their own statements and made social media posts in reaction to the death of Floyd and the protests that followed including Kirk Cousins, Adam Thielen, Alexander Mattison, Chad Greenway, Anthony Harris, and Michael Pierce.

Vikings head coach Mike Zimmer even released a statement in which he expressed his condolences to the family of Floyd and said that, “peaceful protests can help bring change, and we definitely need change.”

Minneapolis has been at the center of all the recent protests, which is why many members of the Vikings organization have been so passionate with their reactions to everything that has been going on. It hits closer to home for them, in more ways than one.

Minnesota’s players and coaches know they have a unique platform that can make a real difference in their community. Well, their community needs them more than ever right now so thankfully, Kendricks and other members of the Vikings appear to be stepping up their efforts to help create some much-needed changes in the Twin Cities.