Life as a fan of the Minnesota Vikings certainly has its ups and downs.

I have been a Minnesota Vikings fan for nearly 15 years, accounting for more than half of my life.

I’ve been around for a very insignificant amount of time in terms of the entire history of the organization and its fan base. I wasn’t there for the missed kick in the 1998 NFC championship, I didn’t watch Randy Moss, and I never saw Fran Tarkenton.

Yet I understand the pain that everyone has been through, the connection it brings, and the hope it provides.

How does someone from New York decide to root for the Minnesota Vikings?

I started writing about football after I went to watch Minnesota play in the 2017 NFC championship against the Philadelphia Eagles. It was then that I realized the type of community the NFL fosters and decided it was something I wanted to be a part of.

Walking through a hostile wave of green wearing the most optimistic shade of purple, I could lean on the other Vikings fans at the game because I knew they were dealing with the same criticism and hatred extended as a not-so-warm welcome by the native Eagles fans.

Watching the Eagles players come out of the tunnel that day brought the city of Philadelphia together in a way that no politician’s speech could ever accomplish. Meek Mill’s “Dreams and Nightmares” was more patriotic to them than the “Star-Spangled Banner.” It was truly electric and made me think about what it means to be a Minnesota fan.

We as Vikings fans have seen some high-highs and some very low-lows. It does not matter that I have yet to step foot in the state of Minnesota, or that I grew up watching pirated Vikings game streams because my cable network was 1,100-plus miles away from Minneapolis. All that matters is that I wear purple on Sundays.

The Minnesota Vikings shade of purple is something that always stuck out to me since I was a little kid. There was something about that color paired with the horn on the side of their helmet that was attractive to me, it was aesthetically pleasing and oddly satisfying.

My father grew up a Vikings fan despite being born and raised in Utica, New York. He would watch with his eyes as wide as his adolescent lids would stretch as Fran Tarkenton would run sideline to sideline terrorizing defenses and changing the way the quarterback position would be played.

My father played quarterback for his Pop-Warner football team in North Utica and would try to run circles around the defensive line just like Scramblin’ Fran.

In his room was a Vikings light switch, which stayed in the same place for almost 50 years. A light switch I would see every time that I would go to my grandparents’ house on Richmond road, enamored with the fact this relic withstood the test of time from when my father was in the fourth grade the same as me.

While that light switch weathered out the years, my father’s passion for Minnesota did not. When Tarkenton finally decided to retire in 1978, my father turned the switch off on his Vikings fandom and that light would not be turned on until years later when his own son would become a fan of that same horn on the side of the most satisfying purple helmet in the world.

The older I got and the more we went over to my grandparents’ house, the more that light switch stuck out to me. My dad’s bedroom was nothing more than an old storage closet by that time. An old, dark room with out-of-date carpeting and a light switch that always seemed to be off. I could not keep my eyes off of it.

I never did grow up watching Vikings games with my dad on Sundays, only the big ones. He was there for me when Garret Hartley broke my heart, sunk Minnesota’s Super Bowl hopes with the game-winning kick in the 2010 NFC championship, and changed the overtime rules in the NFL in one play. I was 12 and it was my first experience with heartbreak, a pain I thought only girls could bring into my life.

My dad saw himself that night as I cried and threw my white and purple Vikings hat at the old box television in my bedroom. He remembered that feeling of loss, heartbreak, and coming up short, a staple of Vikings fan hood. He told me he did the same thing in 1969 when Minnesota lost the Super Bowl to the Kansas City Chiefs, and again in 1973, when they lost to the Miami Dolphins, and in 1974 and 1976.

He saw the Vikings lose in Super Bowls, to go all the way and come up short. I have never seen them get that far.

After that depressing night in 2010, 40 years after my father saw them lose their first Super Bowl, that light switch was turned on again. He would buy me my first Peterson jersey that next Christmas in 2011. Then a Teddy Bridgewater jersey in 2014 and endless pizza and wing combos for Vikings games on Sundays after church.

That same light switch now sits in my childhood bedroom. The room is bright, with white walls and white carpet. Even though I have moved out, that bright Vikings light will shine on for when I have a son wearing purple. 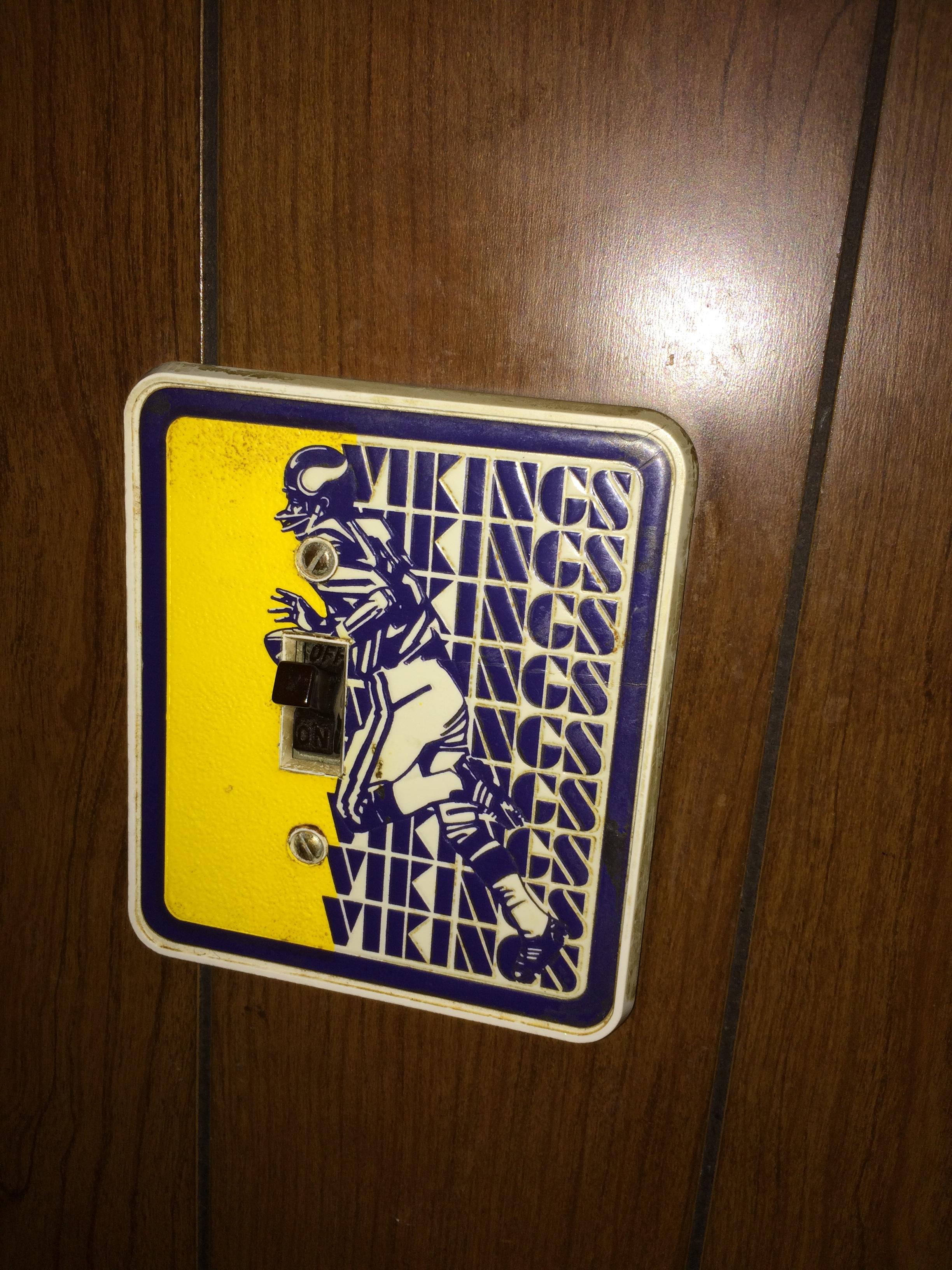 There are a lot of Vikings fans like my father and perhaps there are even more just like me. To be a Minnesota fan is to be a part of a community of optimism, it’s a fan base of genuine, or perhaps blind, passion. It’s a group of people who fool themselves into believing that “next year will be the year,” despite having no evidence to prove their theory.

We are a group of people who seem to be cursed. A hopeful franchise quarterback’s leg nearly falling off in a no-contact practice drill. A missed 27-yard field goal to lose a home playoff game. Loving a team that invents ways to lose and never fails to provide drama to its fans, we root for the Vikings with some sort of mindless loyalty.

Loyalty is what being a Vikings fan is all about. It’s about connecting with complete strangers just because they live in or are from Minnesota just by saying the word SKOL! This is one of the most passionate, widespread fan bases in the NFL and we do not care where you come from or where you’re going as long as there is purple on your back.

When I think about Vikings fans, I think about a group of people who are passionate, loyal, and optimistic. Being a Minnesota fan is a soft skill that should be included on a resume.

One day the time will come when the Lombardi Trophy finally makes it to the land of 10,000 lakes. When that day comes, all of this loyalty and optimism will be rewarded.

Until then, Vikings fans must remain a community, keep our optimism, and chant our proud SKOL chant louder with each passing year.